When trying to figure out how anything works, it helps to know exactly what you’re working with. A chainsaw is a portable saw with “teeth” operating in a circular motion around a guiding bar that cuts through wood or wooden things.

Tree felling, limbing, bucking, trimming, creating firebreaks in wildland fire control, and gathering firewood are all operations that call for the employment of this tool. Chainsaw art and chainsaw mills require specialised bar-and-chain combinations, which have been developed for use in chainsaws.

Leading chainsaw producers include Stihl and Husqvarna. Quality and durability of the products are well-known hallmarks of both companies. Stihl MS261 and Husqvarna 550xp will be up for comparison today. So keep reading to find out which one you should get!

Everything from tree cutting to bucking to cutting firebreaks to gathering wood requires a Chainsaw. As a vital equipment for tree cutting and other wood-cutting activities, Husqvarna has produced and well-professionalized chainsaw, Husqvarna 550xp. 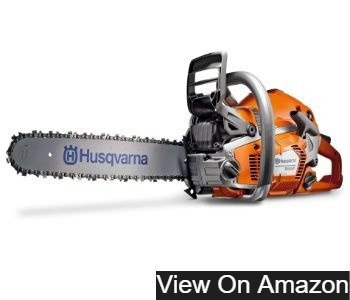 The Husqvarna 550xp was created for use by landowners and tree care experts who have received specialized training. There are numerous revolutionary technology built into this chainsaw’s construction to ensure it works perfectly every time. The chainsaw is a great alternative because of its portability.

MS 261 is one of STIHL’s most advanced chainsaws in terms of technology, being powered, environmentally friendly, light, and compact. This redesigned model, which replaces the venerable MS 260, comes equipped with numerous desirable features, including decreased fuel consumption, reduced exhaust emissions, and improved ergonomics. 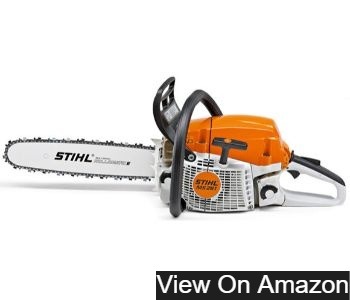 It also boasts an Ematic chain lubrication system, which decreases the amount of bar oil used by up to 50%, and a variable-displacement oil pump, which reduces chain oil usage by the same percentage as the previous feature.

The STIHL MS 261 is more ecologically friendly because of its microprocessor-controlled ignition system, which is part of the groundbreaking chain saw engine technology. Chain saw operators will benefit from a more enjoyable work environment as a result of this change.

A comparison between the chainsaws of both

After putting the 550 and 261 through their paces, we’ve come to the conclusion that they’re both fantastic chainsaws. For the most part, there are no discernible distinctions between the two save for the fact that they both begin with a maximum of three pulls.

Which one is faster?

The aggression and speed of a two-stroke engine are two of its most distinguishing features. There is a slight advantage to Husqvarna’s swift acceleration from a standstill to full throttle over the other chainsaw’s. At least you’ll be able to detect it. It doesn’t matter which saw has a rotating base, because they’re both blazingly fast.

Also, their weight distribution differed, which was something I noticed. Increasing the pace while releasing the grip causes the 261 to rise even higher. I don’t think this, on the other hand, has anything to do with usability.

The 261 is already smaller and lighter than the 550 on paper. But we didn’t know the specifics until today, and things are about to get nerdy. A 15-inch guide bar and chain were used because Pixel is “standard” on the new 550, and I wanted to measure weights with them.

Due to a lack of a 15″ Picco (1.3mm) on the Stihl, tests were conducted on a 16″. Using varied guide bar lengths felt weird, so we ran it with a full tank and no guide bars or chains instead, as these were instead separately weighted. It worked!

If there’s anything worth noting, it’s the new Mark 2’s longer saw body and increased number of blades (261). Husqvarna specifies on their guide bar that a 15-inch wheel should have a diameter of 38 centimetres. Stihl’s comparable measures 37 cm in length. My actual results indicate a Mark 2 of 34.5 cm and a Stihl of 36 cm. This is demonstrated in great detail in the accompanying video, where you can also see how the new 550’s silencer and oil sump protrude.

Finally, it’s interesting to observe that Husqvarna has 2 more drive links on their 15″ guide bar than Stihl, with 64 drive links instead of 62. Husqvarna’s guide bar is noticeably longer, as is the overall length of the machine.

Which one is equipped with fast cutting time?

Due to the fact that this is not a scientific experiment, we must proceed with caution. Additionally, the chain parameter has a far higher impact than most people realise. In this respect, they are nearly equal, with the exception of the Stihl’s somewhat faster straight-through cut. However, the difference is so negligible that it is unlikely to have any impact.

It’s also important to point out that the most similar test is with 15″ systems with a thickness of 1.5 mm. This is owing to the fact that the test was conducted using the same same set-up every time. The Stihl saw chain and guide bar were 1 inch longer than those used by Picco/Pixel. It’s debatable whether or not they can be compared straight up if they’re the same width.

The Husqvarna’s rear handle grip has a significantly bigger circumference than the Stihl’s. The Husqvarna handle was more comfortable for me because of the shape and size. Despite the fact that he had large hands, the Stihl owner who used my saw found the Husky grip to be more comfortable. The Stihl would be my first choice if my hands were tiny or medium in size.

Compared to the Stihl, the Husky’s throttle safety appeared more forgiving when you pushed the throttle all the way down. When using the Stihl, if the safety lever wasn’t fully depressed, the throttle would slacken, whereas the Husky was less fussy.

Both saws required the same amount of effort to operate the cord, but the Stihl included a compression release to make things a little easier. This feature did not come in handy during the day, though, as both saws started easily (as you would expect with a modern 50cc saw).

For oil and fuel, both saws employed flip caps, which I considered to be decent and manageable, although the Husky’s flip caps felt more sturdy.

The Husky’s engine top cover removal and replacement process was sped up because to the inclusion of easy retention clips that can be removed with a scrench tool and reattached with your thumb. The release screws on the Stihl are a little more sluggish when you’re in a hurry.

Stihl, in my opinion, has prioritised choking the saw, whereas Husky has focused on putting out the fire. Given that I only choke once or twice a day, but constantly stop the saw for conversations, shifting limbs, hydration breaks, etc., I prefer the Husky setup.

In terms of ease of use, Husqvarna outnumbers Stihl.

The Husqvarna had a more premium feel to it, but the Stihl was more flimsy. The Husky exhaust and mounting screws, the silver engine box, and the aesthetics of other parts impressed both the Stihl owner and me. Certainly, both cars’ insides are top-notch, but the Husky appeared to be a little more sophisticated from a visual standpoint. It’s all in the eye of the beholder, but we both thought the Stihl seemed less “premium looking.”

This is, after all, what a significant portion of you are concerned about. The Husky was somewhat faster, but that is likely due to the narrower kerf chain. I sliced hundreds of times with both in the same wood. However, it appears that the power delivery has changed. At low RPMs, the Husky offers somewhat more torque than the Stihl. At full power, the Husky sounded as if it was running at a slightly higher RPM than normal. Sound and reality, on the other hand, are not necessarily the same.

At full throttle, they seem to be on par in terms of power. Power is delivered differently depending on who you ask. Due to its increased speed and ability to cut through thick wood with ease, the Husky is now my favourite 50cc production saw. In the event that you’re taller than average and would prefer longer bars, skip the 18″ and go with the Husky 20″.

The Husky’s throttle response was marginally quicker, but only by a hair. Even if it meant risking my own money, I’d enter a race with the Husky anyhow. But once again, it’s a hair out there and doesn’t mean much in the real world.

The distinctions between the two chainsaws are reflected in the needs of the users. In most cases, whichever chainsaw you choose from this list will be a great fit for your needs.